When I remember Grandmommy’s house…

When I remember Grandmommy’s house, it’s always Summer.  Or maybe Spring.  It’s at least warm enough to be outside.  We played outside a lot.  I have memories of poking underneath her azalea bushes, looking for Easter eggs with my cousins; running to the front yard with a dime clutched in my hand, trying to catch the ice cream truck as it made its way down the block; and catching fireflies after dark, putting them in an old mayonnaise or pickle jar with holes poked in the lid.  I suppose we visited other times of year, or perhaps it would be raining, because I also have memories inside the house, although this particular story took place on the brick patio outside the kitchen door.

Current view of Grandmommy’s house
(it hasn’t changed much at all!)

When we would visit, there was never a need to bring our own toys – Grandmommy had things for us to play with.  There was the stuffed dog – long, like a dachshund, but with blue velvet around the middle – I liked to sleep with my head on his middle part.  And the babydoll with a squishy belly and hard rubber arms, legs and face – I carried her around all the time, giving her bottles and rocking her to sleep.  It was the babydoll that got me in trouble one time – the only time my grandmother ever got mad at me.

The family next door had 3 girls – two, a few years younger than me, and Susan – a couple of years older.  Susan was tall, pretty, and most importantly the oldest.  She often decided what game we would play.

One time, I took the doll outside and met them in Grandmommy’s side yard.  Susan wanted to play operating room – she would be the doctor and her sisters and I would be the nurses.  So we got a butter knife, some Band-Aids, and a permanent marker.

Susan laid the doll on the patio table and pretended to cut her open with the butter knife.  When she was done, we put bandaids on her belly, and then drew scars and stitches on her arms and legs.  With the permanent marker.

When Grandmommy found out what we had done, she got mad – angrier than I had ever seen her.  She sat me down on her red kitchen stool – the kind with the steps that folded up underneath the seat – and scolded me for what felt like a long time.  She told me I was not allowed to play with the babydoll any more, and couldn’t take any toys outside.  I was more upset that she was mad at me than that I was being punished – I hated disappointing her.   But I’ve always wondered if Susan got in trouble too, since it was her idea!

Peter and the Rock

I am currently participating in an Adult R.E. (Religious Education) class at my Unitarian Universalist church.  The minister is leading a course titled “Owning Your Religious Past” that is designed to address where we have come from in our spiritual journey.  She described it this way:

“Few UU’s are born into the faith, and when we find our way here, it can be with significant baggage from past church experiences. This class will help us sort through what was, what is, and what can be in our experience of religious community, its tools of self-exploration and sharing, finally enabling us to realize a faith that is powerful, nurturing, and relational.”

Last Sunday, the 2nd in the 5 week curriculum, we spent some time with our eyes closed, remembering a church from our past that had a big influence on us, either positively or negatively, mentally walking through the entire building, recalling sights, sounds, and smells.  We then spent a few minutes drawing a floor plan of it and sharing with the other members of the class what we remembered.

My memory was of the Catholic church of my childhood.  I remembered walking up the large flight of marble steps, through the heavy wooden doors, and into the sanctuary with my family.  We were usually late, rushing in as the first hymn, or even the first reading, was already underway.  We sat in the same general area each week – near the back, on the left side of the center aisle.  I still do that at my new church – although now I move to the right, near the side aisle, and am a bit closer to the front.

I think we are all creatures of habit and tend to gravitate to our “comfort zone”.  I remember often asking my dad why we had to sit so far back.  Looking back, it was probably because we were late, and he didn’t want to make a bigger scene than necessary.  He was never one to draw attention to himself.  But his usual answer at the time was to suggest that I look at all the candles on the altar and then tell me that if the place caught on fire, he wanted to be as close to the door as possible!

One of the sights I remember from many Sundays sitting in the pews was the Bible verse painted around the clerestory, just below the upper level windows. In letters edged with gold, it read

For those as lacking in biblical knowledge as I am, that verse is from Matthew 16:18.  As you can see, it was in Latin, which I never took, and it wasn’t until I was in French class in high school that I deciphered what it meant.  In French,  the name Peter translates as Pierre, while the word for rock is pierre.  Yes, the same word.  Sometime after I learned that, I was sitting in church one Sunday, looking at the words high above my head (probably trying to keep from falling asleep during the sermon), and realized that Petrus/Petram looked a lot like Peter. Aedificabo looked like “edifice”, which had to do with buildings, and all of a sudden I put it together.  I was sitting in St. Peter’s Church!  And there was a Bible verse I vaguely remembered hearing at some point in my Catholic school education about “You are Peter, and on this Rock, I build my church.”

It all began to make sense.  At least, the choice of Bible verses made sense.  (I mean, it was St. Peter’s Church!) I never did make sense of the dogma that was preached.  Which is why I no longer consider myself a Catholic.

I have been thinking about my childhood church a lot lately.  Taking part in this exploration of our religious past is bringing up lots of memories, but I also have realized this week that St. Peter’s is still a part of my present.  7 weeks from today*, I will be back in St. Peter’s Church.  This time, though, I will be sitting in the front row, listening to my brother eulogize my father, and missing my rock.  I just hope the church doesn’t catch fire!

*For those who don’t know, we have had to wait for my father’s funeral until we were given a burial date by Arlington National Cemetery.

These days, I make pumpkin pie for everyone else and cherry pie for me!

1) Making yeast rolls with Mom and snagging one from the bread basket before it gets to the table.

2) Learning how to make real whipped cream from Grandmommy and eating a spoonful by itself because I don’t like pumpkin pie.

3) Being in charge of putting out place cards and deciding who I want to sit next to each year.

4) Talking Dad into pouring me a taste of the wine so I could feel grown up for just a day.

5) Listening to mom sneeze 3 times at the end of the meal and her telling us Granddaddy always did the same thing.

These friends helped us celebrate holidays each year.

6) Waiting for dessert until family friends come over and then having game night while we digest it all.

7) Carrying boxes (and boxes and boxes) of decorations down from the storage cupboard above the bathtub while mom fixes hot chocolate the next morning.

8) Helping untangle the lights with Dad because Mom doesn’t have the patience for it.

9) Taking each ornament out of the box one at a time and each of us getting to hang “ours” on the tree wherever we want. 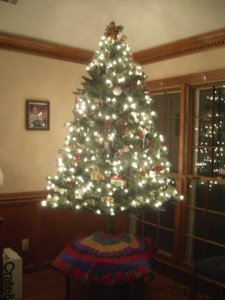 This is my tree now, but I still like to turn out all the lights and admire it!

10) Turning out all the lights except the ones on the tree and the candles in the windows, turning on the radio to the station playing carols, and listening to the crackle of the fireplace as we are surrounded by the warmth of family.

What are your childhood memories from this time of year?

Posted on June 23, 2010 | 1 comment
Larger than life, hero of mine
Working hard to provide
Family man, father of two
Lawyer by day, farmer too
Quiet, smart, humor so dry
Believing in me, as long as I try
Pushing hard, wants the best
Proud of me, no need to guess
Smiles so big, arms so strong
Cross country trips, filled with song
Love of family a driving force
Slow and steady was his course
Didn’t slow down til dementia set in
Battling Alzheimer’s, the disease will win
His memories fade, mine are stored
Hero of mine, deserves an award!